THINGS TO DO IN LAKE HAVASU CITY

Nestled in the Mojave Desert, near the border of California is Lake Havasu City...a place with gorgeous mountain views, year-round sunshine, and indescribable beauty. This sprawling waterfront city is home to almost 60,000 people. The city is fairly young, having only been established in late 1963. Lake Havasu City boasts a short but rich history, a thriving downtown, and a busy waterfront area.

Lake Havasu has an ideal centralized location between Las Vegas, Los Angeles, Phoenix. The closest international airport, Harry Reid International Airport, is inexpensive to fly in an out of from most domestic cities, as well as many international ones.

People flock to the area from all over for many reasons, including its year-round warm weather (hello, snowbirds!), gorgeous photo opps, numerous off-roading excursions, Spring Break events, and of course, its countless water activities. Lake Havasu is truly a playground on the water, touting boating, fishing, wakeboarding, kayaking, swimming, beaches, and more; ready to enjoy nearly any day of the year.

The London Bridge is the most well-known landmark in Lake Havasu, as well as one of the most popular historic sites in all of Arizona. The Bridge was  built in 1831 and originally intended to span the River Thames in London. Unfortunately, it was slowly sinking into the river by the 1960, requiring it to be be dismantled. It was then put up for auction and purchased by Robert McCulloch for $2,460,000 who wanted to use it for his newly established city, Lake Havasu City. The Bridge was dismantled brick-by-brick, shipped over the Atlantic to Arizona, then slowly reconstructed. As there wasn’t technically a need for a Bridge in Lake Havasu City, a channel was dredged underneath it once the Bridge was complete. It officially opened to the public in 1971. Today, the London Bridge is a popular tourist attraction, and as such, shopping, dining, parks, and lodging have been established around it. 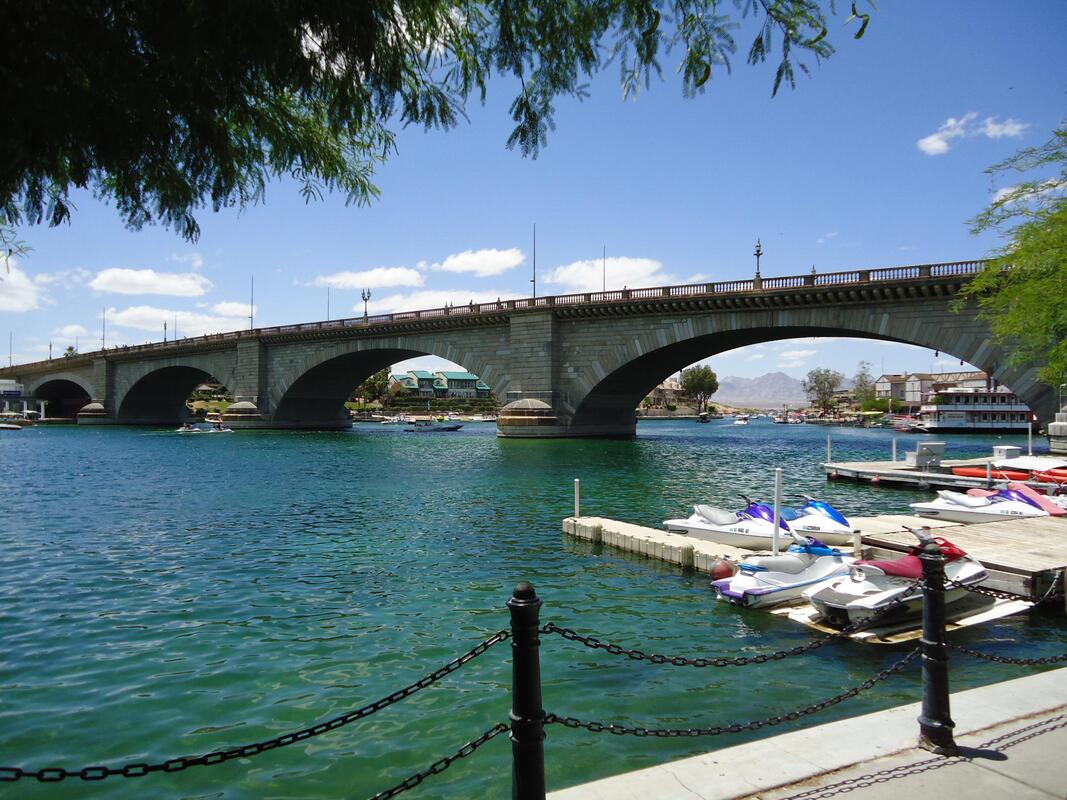 Boating and Paddling in Lake Havasu

Lake Havasu City sits on the border between California and Arizona and covers over 19,000 acres. This huge lake in the desert is well known for recreational fishing and boating, attracting hundreds of thousands of visitors every year. Fishing is a popular area attraction, and there are multiple fishing tournaments held on Lake Havasu, as well as many recorded trophy fish.

Boating on Lake Havasu is a favorite activity for both locals and area visitors.  The clear turquoise blue water, surrounding mountains, and amazing wildlife make it an exciting place for boats of all sizes to explore. The long coastline and multiple launch ramps incredibly easy to get in and out of the water!
Because of the size of the lake, you can easily find peace when out on the water even on busy days. And even if you don't have your own boat, there are multiple businesses that offer boat rentals near Lake Havasu, from kayaks to pontoon boats, and everything in between. Go Lake Havasu is a great resource for boat rentals, marinas, ramps, and more.

Along with unforgettable opportunities for boaters, Lake Havasu has lots of calm areas and shores that are perfect for enjoying kayaking and canoeing. During most of the year, you can rent kayaks, canoes, and stand-up paddleboards at London Bridge Beach, as well as from other local area businesses.
Just north of Lake Havasu City is a great area for paddling as it has lots of little coves to swim and picnic. There's a four mile water trail that takes paddlers along the shores of the Havasu National Wildlife Refuge, the home of hundreds of different species of birds, coyotes, foxes, and bobcats. It's a wildlife-seekers dream!

A bit further north Topock Gorge — a mountainous, wild canyon that won't soon forget! You can get more information about this incredible section of the Colorado River in Scouting Magazine. You can also take an expert guided full-moon tour of the gorge, which includes the tour and rental. 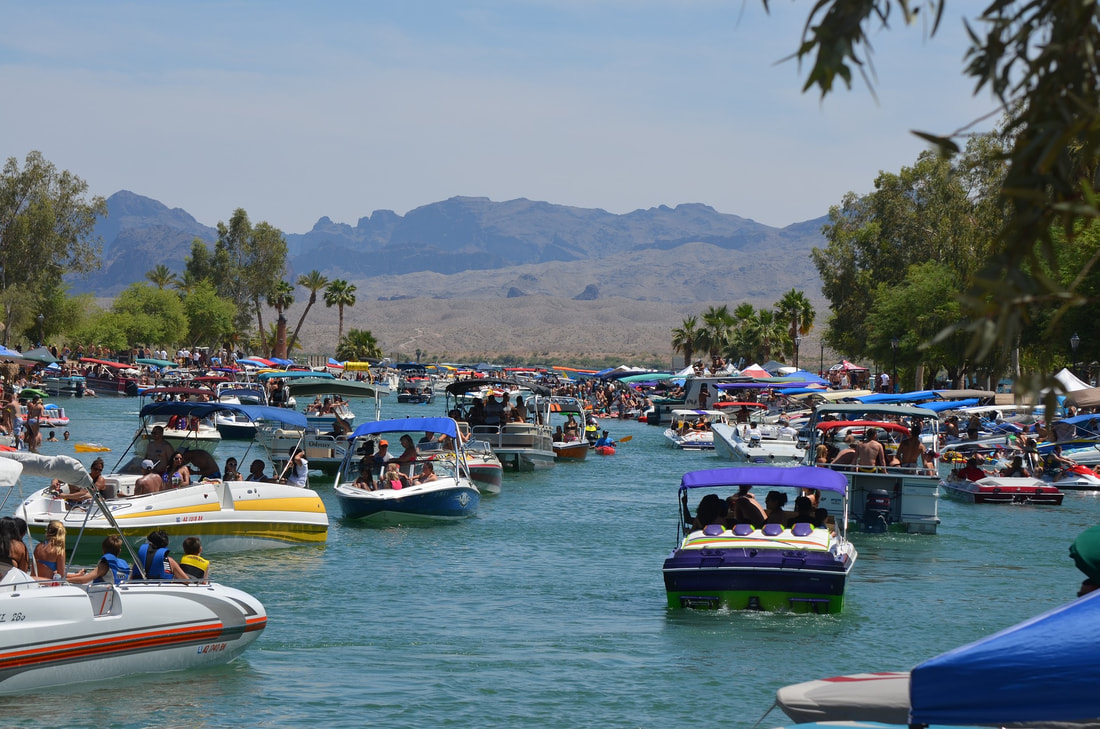 Looking for a relaxing way to watch the water, let the kids play in the sand, or swim in Lake Havasu? Check out the Lake Havasu area beaches! One of the most popular locations to enjoy the beach, as well as many other attractions, is Rotary Park. This idyllic spot includes a playground, BBQs grills, walking paths, picnic tables, a skateboard park, places to swim, nearby restaurants, and lots of areas to spread out and enjoy the view.

The beaches are a great spot to relax year round! While many of the beaches have shade options, we recommend you bring an umbrella, pop-up tent, or other means of shade to provide breaks from the hot sun! Don't forget to bring sunscreen and snacks!​ 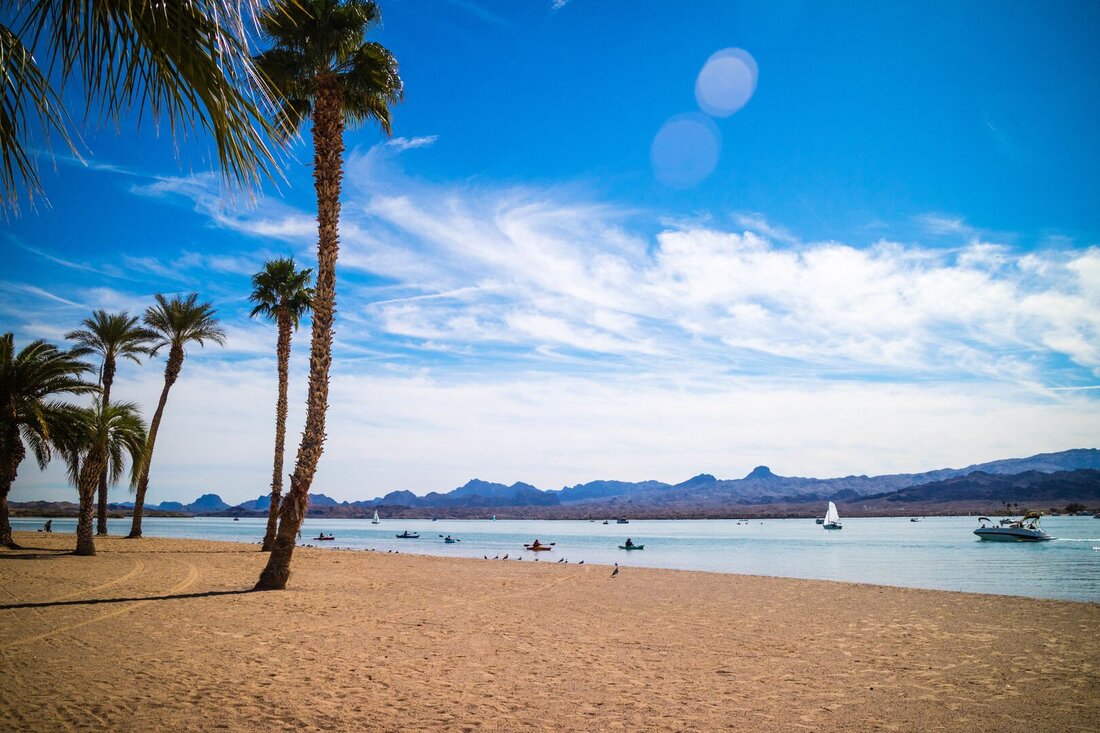 Want to take a self-guided lighthouse tour? Use this map and guide to help you locate each lighthouse. Alternatively, a narrated lighthouse boat tour is available from October through May. 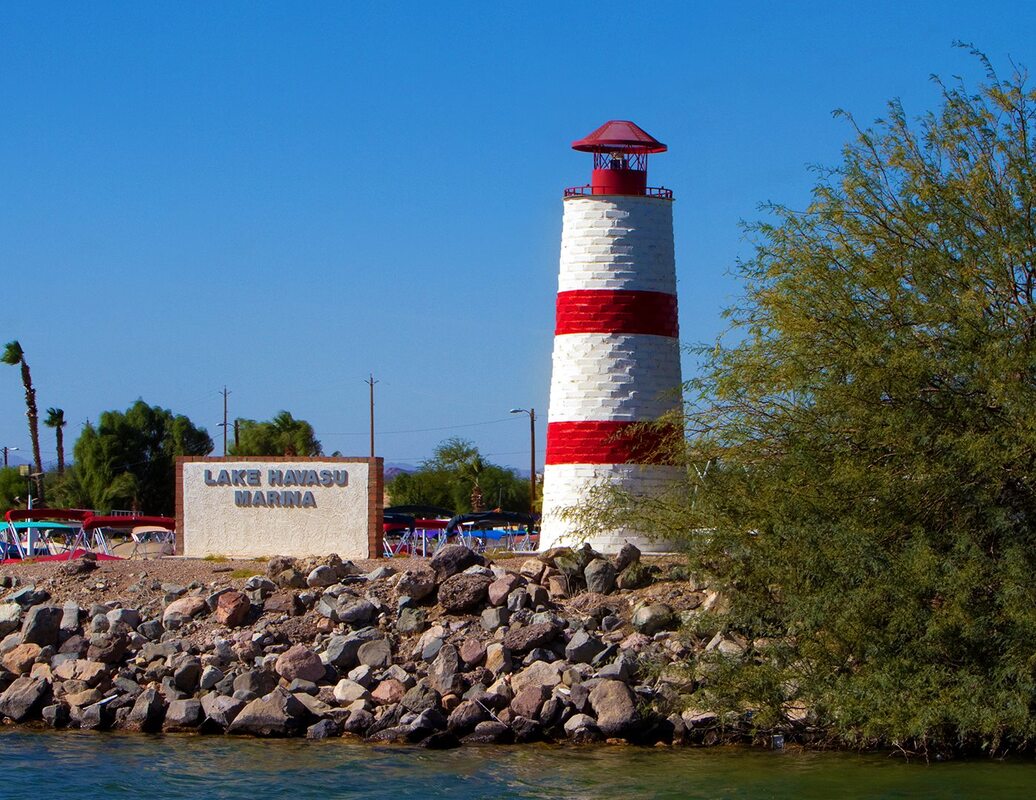 While hot air ballons can be seen throughout the year in the skies of Lake Havasu City, Lake Havasu Hot Air Ballon Festival and Fair, which takes place in mid-January, is by far the best time to see them! This weekend festival includes multiple mass ascensions of dozens of hot air balloons. They float over the lake and the city as the sun rising in the morning before any wind picks up.  The morning ascensions kick off the festival each day, which also boasts music, activities, carnival rides, and food vendors. There are also even ascensions if the weather and wind are cooperating. The night culminates with the Field of Fire where all the balloons are inflated and lit up for everyone to enjoy. If you want to view the festival from a unique perspective, you can rent a spot on one of the ballons for an absolutely unforgettable experience. 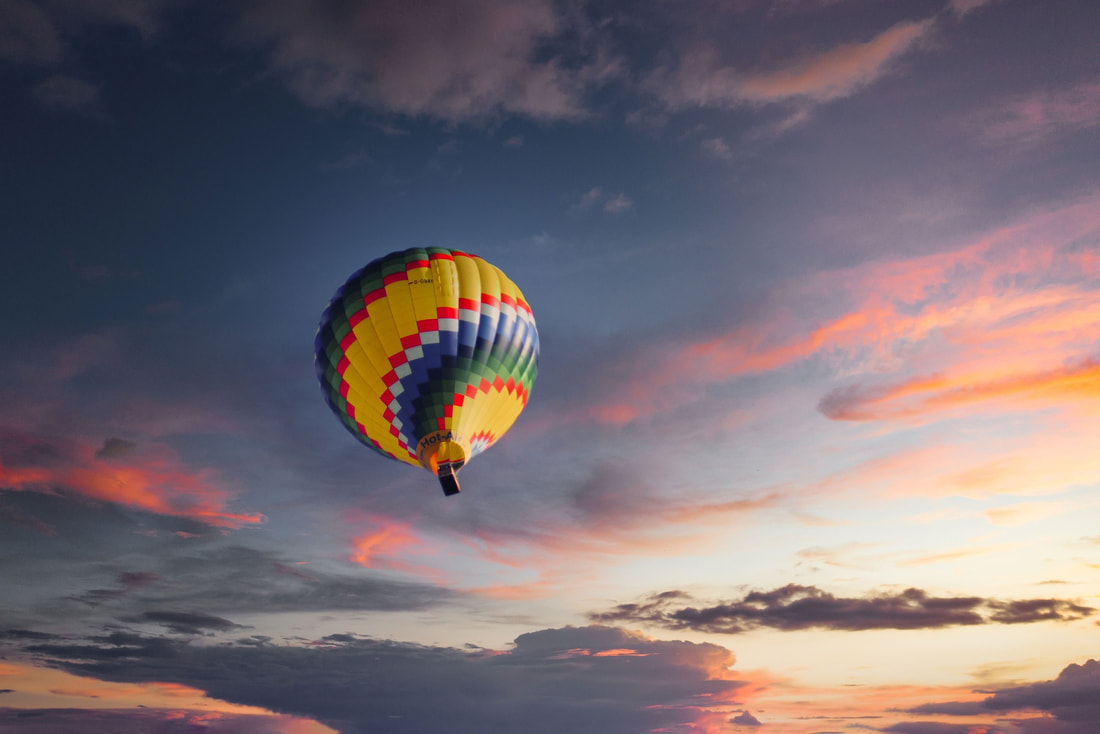 Not all of the fun in Lake Havasu exists on the water. The Lake Havasu area has some great hiking trails, from simple nature walks to all-day excursions. We recommend hiking Lake Havasu in the winter months when temps are cooler. If you choose to hike in the summer, make sure to bring copious options for hydration and shade. The trails in Lake Havasu are dog-friendly, so bring your furry friend!

For a great sight-seeing hike, look up SARA Park. This five-mile trail takes you along the sand, through a gorgeous slot canyon, and down to the lakefront for jaw-dropping views of cliffs, rock formations, and wildlife.

If you can set aside more time hiking in Lake Havasu, here are a few options: While hiking on foot is great, there are many more trails you can explore in Lake Havasu City on an ORV or ATV. 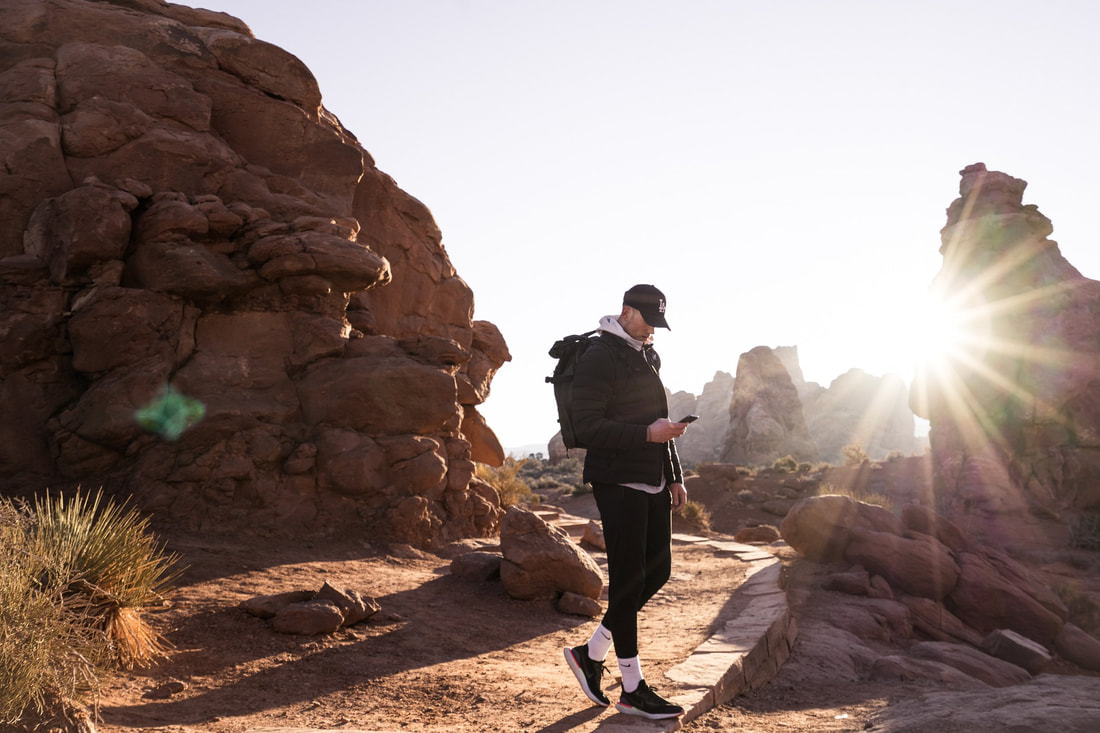 The Lake Havasu City area is home to more than 20 networks of off-road trails, winding through varying terrain, including dunes, canyons, and open desert. Off-road trail explorers have much to choose from within driving distance of Lake Havasu City.

Whether you have, a 4WD vehicle, dirt bike, ATV, UTV, or something else capable of navigating the terrain, they all a lot of fun out on the trails. You can explore the area at your own pace, winding through wildflowers in the spring, scale heights via rock crawling, or go full-throttle and feel the thrill of speed through desert open areas. Fall through spring is ideal off-roading season, as summer temperatures can reach well over 100 degrees.

The Arizona Game & Fish Department has great information about off-roading in and around the Lake Havasu City area, including vehicle guides, safety education, safety videos, and educational courses. 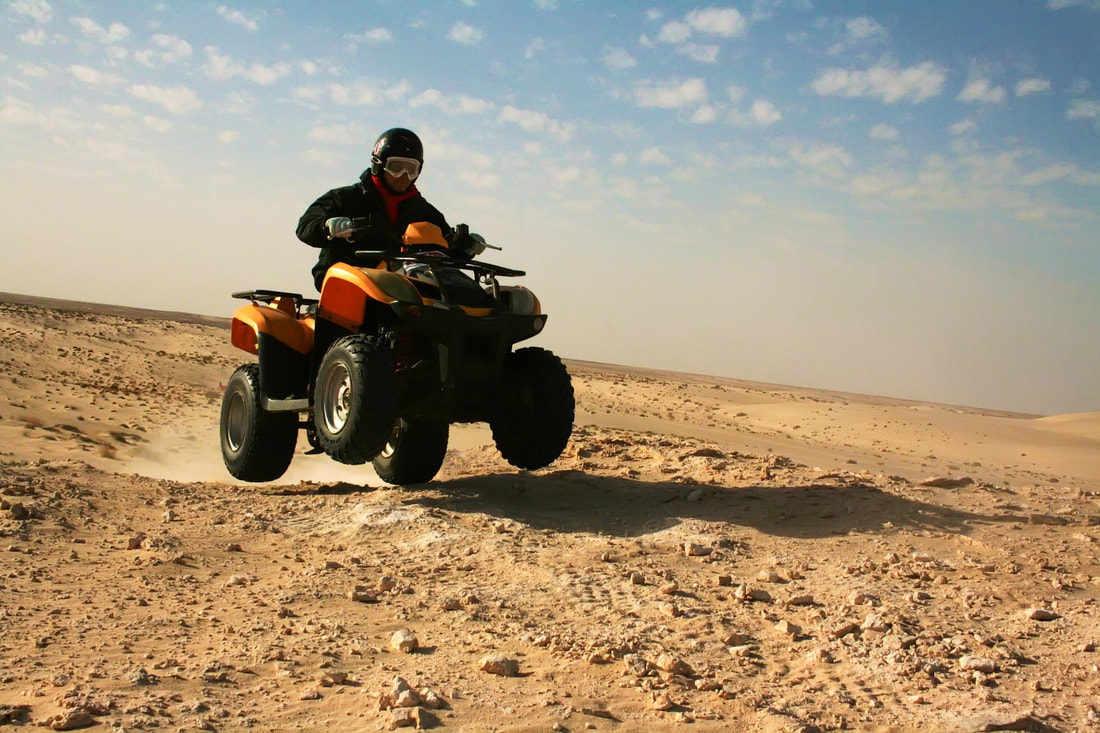 There's nothing like teeing off at the golf couses here in Lake Havasu City, where golfers are surrounded by stunning rock formations and the beautiful waters of Lake Havasu. Area golfing options include scenic 9- and 18-hole courses suitable for every skill level. The climate in Lake Havasu City allows for almost year-round golfing, so escape the winter cold with a golf outing under a bright blue sky and perfect temps!

Courses marked with an orange star designate "must-play" top golf courses in Arizona, touting exceptional views and plenty of challenging fun for even the most seasoned golfers. All area golf clubs are open to the public so you won't have to worry about being shut out from a great day out on the green! 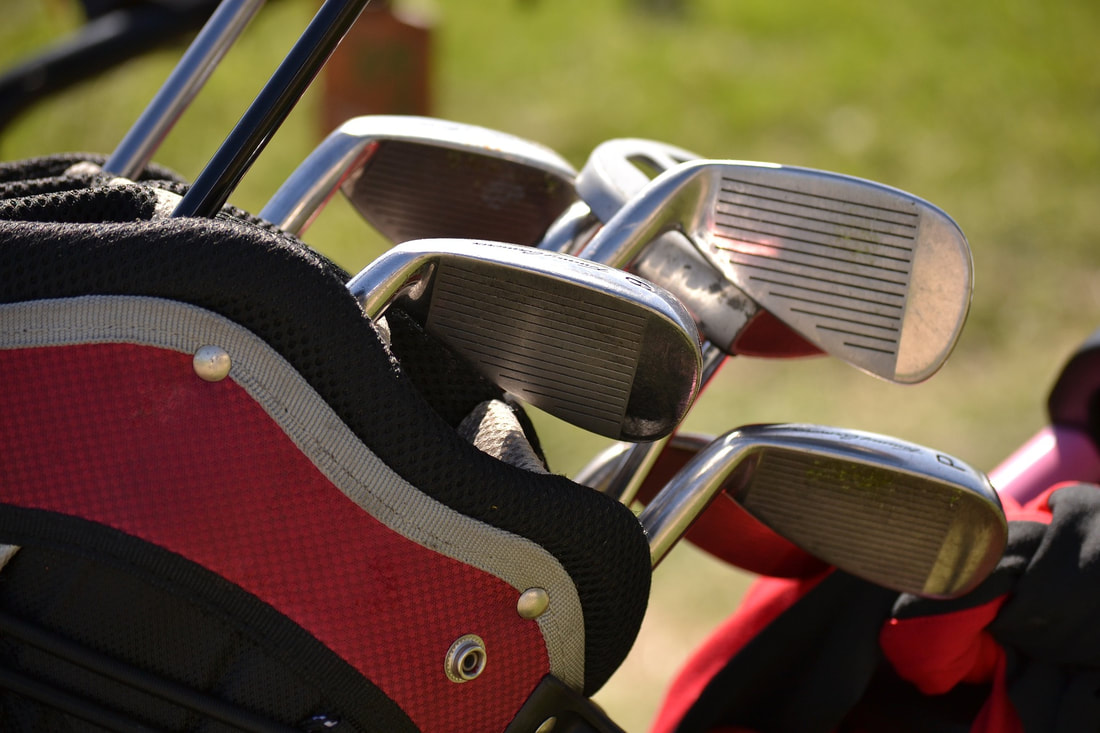 Clean air, blue skies, mountainous terrains, dozens of trails, and an abundance of open space provide plenty of places to go biking in Lake Havasu City. Tougher trails will challenge the experienced rider, while level, paved paths are perfect for those looking for a relaxing time. Cycling is the perfect way to experience the lake's refreshing breezes, or the sun as it sets in the distance behind gorgeous vistas, mountains, and lake views. The perfect climate means that you can bike all year-round in Lake Havasu City!

Those looking for a relaxing ride can grab a cruiser and head over to the Island Trail for an simple, scenic ride filled with views of the mountains and lake. Or, bike along Highway 95 down to Parker Dam. The twists and turns along the way make this trip challenging, but enjoyable. Mountain biking in SARA Park has numerous trails with every level of difficulty. Some of these trails lead to beautiful mountaintop views while others end at the lakeshore.

If you need to rent a bike, check out these location bike rental options. 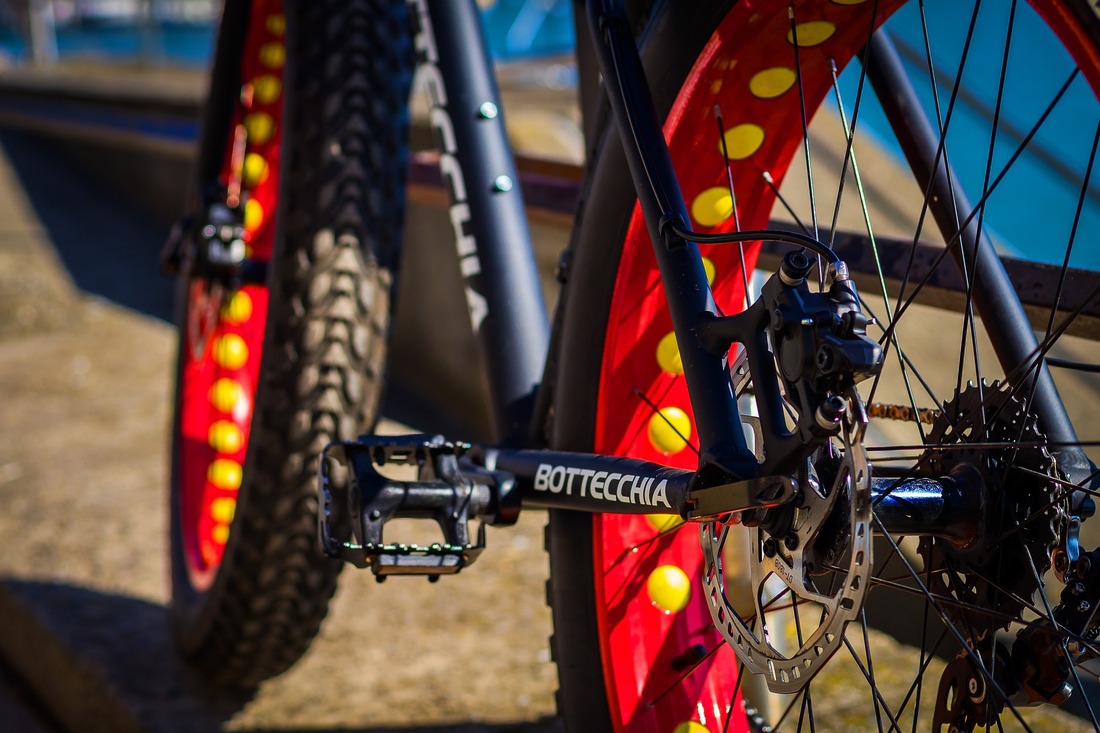 Lake Havasu City offers outstanding bass and redear sunfish fishing.  The area has an extremely healthy and thriving ecosystem thanks to one of the largest and most successful fish habitat improvement projects ever undertaken in the U.S., ensuring an abundance of fish.

You can work with an area expert fishing guide or go solo! Launch a boat from one of the many ramps and marinas and cruise the more than 60 miles of lake shoreline for perfect spot to snag the ultimate catch, or cast a line from one of several public access fishing docks and piers.

See for yourself what makes Lake Havasu City the ultimate fishing destination! Up for the a little competition? Take part in one of the many fishing tournaments that happen throughout the year. 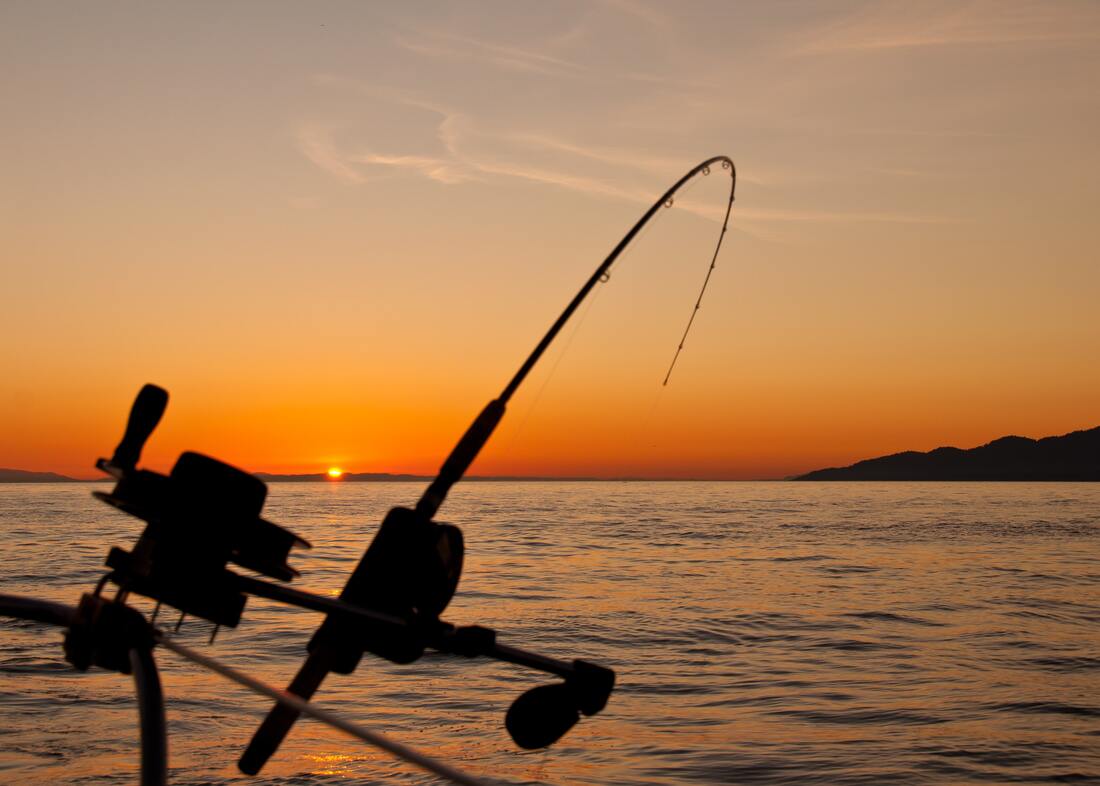